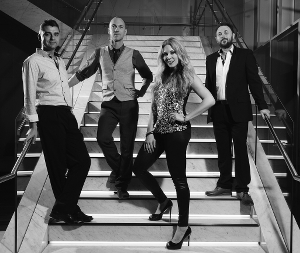 This band consisting of a stunning female vocalist combined with a tight line up of bass, drums and electric guitar aim to bring you a fun, energy filled experience.

Mixing up funky dance numbers, old school soul, with pop & rock classics, this band has something for everyone from their vast repertoire of hit songs. With an impressive performance history of over 10 years from performing to around 25,000 people at Suncorp Stadium opening up the Broncos vs Tigers football match in 2017, to being the opening act for Aussie icons Daryl Braithwaite twice (2012 & 2014) and also the Choirboys (2007), through to performing at countless large corporate events for high profile companies, you can be assured of quality music and an extremely professional service.

They perform completely live, no backing tracks are used and everything you hear is done there and then in the moment. An incredibly entertaining choice to get everyone on the dance floor at corporate events, weddings, and private parties of any size being able to cater as background music right through to high energy dance tunes.

Also available as a 5 or 6 piece by adding saxophone or a second female vocalist to the above lineup.

This email address is being protected from spambots. You need JavaScript enabled to view it.